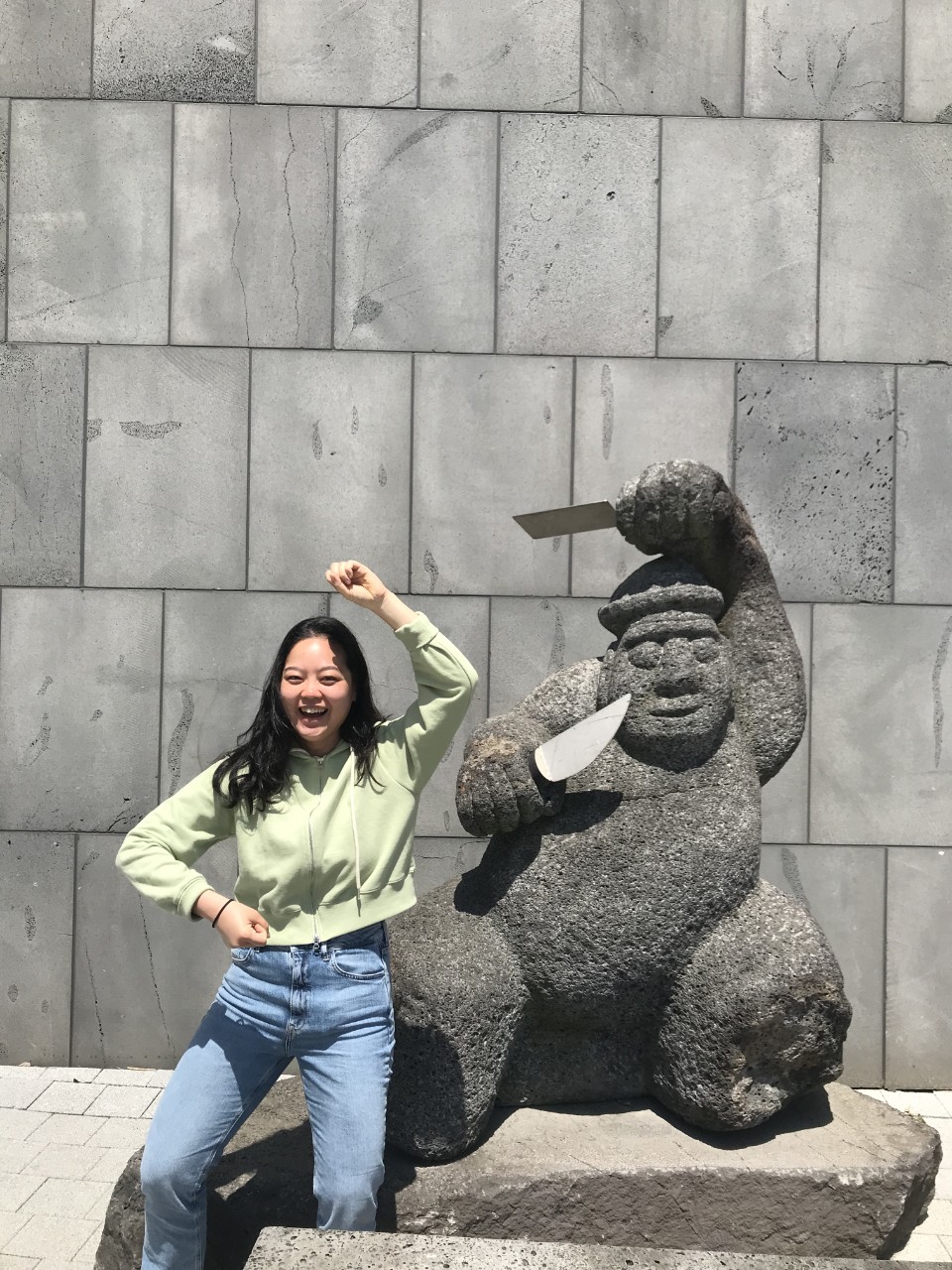 Minjung Park was born and raised in Uijeongbu, South Korea where lots of U.S. Army military camps were located. When she was young, she liked to say “Hi” in English to American soldiers passing by on the street and maybe her interest on other languages and desire to communicate with people from other culture started there. She went to Daeil Foreign Language High School where she was exposed to various languages such as Chinese, Japanese, Russian, German, Spanish, and French. She chose Spanish as her third language apart from English because the strong yellow and red color of the Spanish national flag attracted her.

Then, she studied Applied Linguistics in Sookmyung Women’s University, especially on how to teach English. During her BA, she visited the University of Tübingen in Germany and the University of Thessaloniki in Greece to learn what EFL (English as a Foreign Language) programs they were providing to students. In the third year of her undergraduate degree, she studied Sociolinguistics in University of Toronto as an exchange student and carried out a brief study on how Korean slang and in-group words are spoken in a different way by Korean people living in Seoul and Toronto, respectively. After finishing the undergraduate, she earned money by teaching English to teenagers in Seoul, Korea and flew to Madrid, Spain. The first day she arrived in Spain, she could not even understand “¿Quieres una bolsa?” in a supermarket but the last day before she went back to her home country, her Spanish improved greatly that she could make an argument with her landlord to get back the rent deposit.

Coming back to Korea, she taught Spanish to adult learners as well and she liked teaching Spanish more than teaching English because English education is too much test-oriented in Korea. Based on her teaching experience, she got more interested in the cognitive process of her students’ learning languages and she applied for Language Acquisition in Multilingual Settings (LAMS) MA program in University of the Basque Country. While taking a course named ‘The acquisition of Morphosyntax’, she focused on the difficulty that Korean learners of L2 English had with articles and she came up with the topic of backward transfer if Korean learners of L2 English and L3 Spanish would benefit from the third language in understanding English articles. So, the title of her MA thesis was ‘Comprehension of English articles by Korean learners of L2 English and L3 Spanish’ which was supervised by Dr. María del Pilar García Mayo. In her Ph.D., she will extend the topic into production as well and plans to carry out psycholinguistic experiments such as eye-movement tracking. She is supervised by Dr. María del Pilar García Mayo and Dr. María Martínez Adrián.

This website uses cookies to improve your experience while you navigate through the website. Out of these cookies, the cookies that are categorized as necessary are stored on your browser as they are essential for the working of basic functionalities of the website. We also use third-party cookies that help us analyze and understand how you use this website. These cookies will be stored in your browser only with your consent. You also have the option to opt-out of these cookies. But opting out of some of these cookies may have an effect on your browsing experience.
Necessary Always Enabled
Necessary cookies are absolutely essential for the website to function properly. This category only includes cookies that ensures basic functionalities and security features of the website. These cookies do not store any personal information.
Non-necessary
Any cookies that may not be particularly necessary for the website to function and is used specifically to collect user personal data via analytics, ads, other embedded contents are termed as non-necessary cookies. It is mandatory to procure user consent prior to running these cookies on your website.
SAVE & ACCEPT